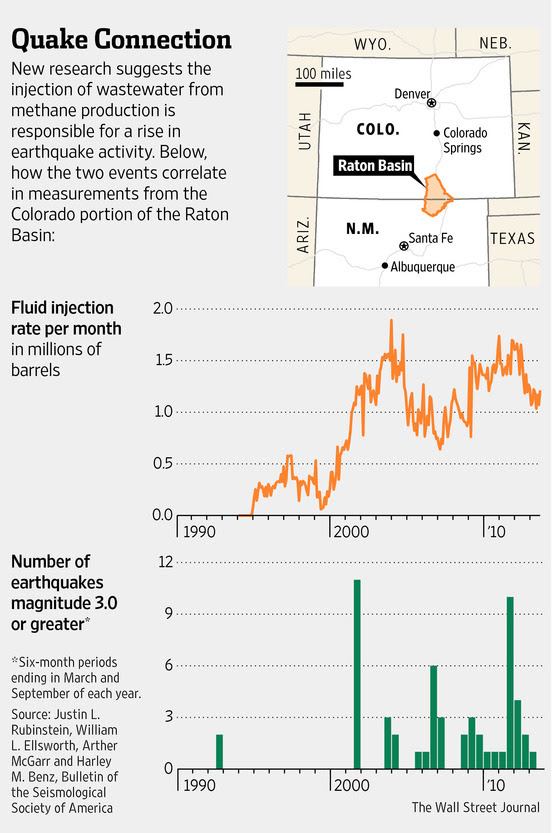 A magnitude-5.3 earthquake that hit Colorado in 2011 was likely caused by the injection of wastewater into the ground, a process used in natural-gas drilling, according to new research to be released Tuesday.

The new study, published in the Bulletin of the Seismological Society of America, adds more detail to a growing body of work seeking to establish and explain the connection between human activity and seismic events, known as induced quakes.

Geologists have been intensely focused on the field in the past few years, as some states, including Oklahoma, Ohio, Colorado and New Mexico, have seen a rise in quakes that coincides with an uptick in activities associated with oil and gas extraction, scientists say.

According to the American Petroleum Institute, which represents the energy industry, there have been “fewer than 40 incidents of seismic activity” over the past five decades “potentially associated” with thousands of injection wells across the country.

Wastewater is a result of the process of oil and gas extraction. Water is pulled out of the ground during drilling; it is then separated and injected back into the ground.

A connection between wastewater injections and induced quakes is rapidly becoming widely accepted in the Colorado-New Mexico region and elsewhere. But a more difficult task for scientists has been connecting specific quakes to injection sites, especially when there also has been natural seismic activity.

“The evidence is a lot more abundant and makes a much stronger argument that these quakes were induced instead of being natural,” said Arthur McGarr, a co-author of the study and a geologist with the U.S. Geological Survey.

Between 2001 and 2013, there were 16 quakes registering a magnitude 3.8 or greater in the Raton Basin, which straddles New Mexico and Colorado. Between 1972 and 2001 there was one quake of that magnitude, according to the study.

A magnitude 5.3 quake in August 2011 occurred near two injection wells. The wells were just a few miles from the site of the quake, and were injecting “more than 400,000 barrels of wastewater per month” in the 16 months before the quake, the study said.

That quake “is the second-largest earthquake to date for which there is clear evidence that the earthquake sequence was induced by fluid injection,” the study said.

The study “is an important step in characterizing this hazard as a whole,” said Bill Barnhart, a research geophysicist with the U.S. Geological Survey, who didn’t author the study but is familiar with it and others in the field. “Understanding the processes behind” induced seismicity is “critical” to mitigating the risk, he said.

Industry leaders, scientists and public policy makers are beginning to come together to share research on the topic. This week, energy industry representatives and scientists are meeting to discuss induced seismicity at a conference in Banff, Alberta, Canada.