The extraordinary places story as it stands – Bismarck Tribune 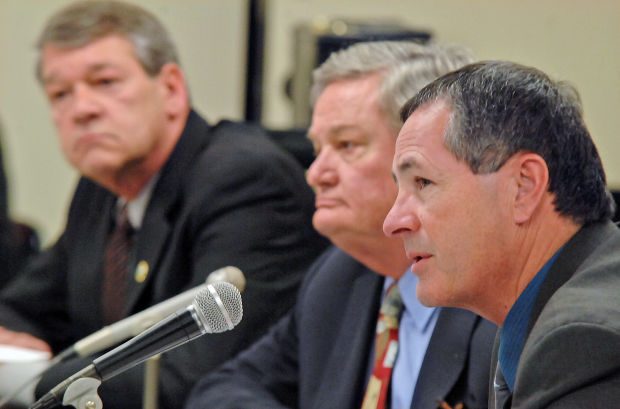 Don Morrison of the Dakota Resource Council felt the original policy was a step in the right direction because it emerged from people in the state finally having a voice.“We like to have a process where people’s concerns can be heard, where they’re much more thoughtful of where we put oil rigs and pipelines and roads as we develop,” Morrison said. “We’re not anti-drilling, but it’s how it’s done, and we can do it right.”

The extraordinary places story as it stands

The North Dakota Industrial Commission voted on March 3 to implement a policy for drilling within areas of interest on public lands. The policy, effective June 1, requires all permit applications to be subject to a map query to determine if the well site falls within one of these areas. If it does, then it becomes open to comments in order for the commission to develop an impact mitigation plan.

The areas of interest include historical, archaeological, wildlife, tourist and ecological heritage areas of the state.

Industrial Commission member Attorney General Wayne Stenehjem introduced the policy earlier this year to Gov. Jack Dalrymple and Agriculture Commissioner Doug Goehring, who round out  the commission. The initial policy included public and private lands, but Dalrymple came to the March meeting with a suggestion to remove private property out of the policy for now, and allow an opportunity to test the process on public land first.

“I believe the decision to take public comment on activity on private property is a very serious policy question, and our regulatory role may not include a policy decision that significant,” Dalrymple said.

The policy will be implemented by the Department of Mineral Resources (DMR) as it will need to post a notice for each application that falls in an area of interest and then review any comments that could help with mitigating impacts. DMR Director Lynn Helms said his office has traditionally allowed comments, but it is “an enormous change” to seek comments from ten land management agencies, as well as the public, for these applications.

“I really think it will have significant impacts,” Helms said. “They may have been watching it before, but there was not an organized process for them to give input, so we rarely heard from land management.”

He said he’s hopeful that by providing information to people knowledgeable about the area that they will offer a better sense of how to develop the land.

“When it goes to wildlife people who know what species habitat in that area and how they use it, maybe they will give really useful comments … on how to minimize those impacts,” Helms said.

The biggest differences people will notice as a result of the policy will be access road routing and well pad design in order to reduce visual and wildlife impacts, he said.

“It probably means cost will go up for the operators because to do those things, it will cost more money,” Helms said.

The process to obtain comments will be largely automated. If a permit request applies to an area of interest, or within the one- to two-mile buffer zone around the area, text is generated electronically for the daily activity report. An automated email will go out to the 10 state and federal agencies asking for comments to be sent to a specified email address.

At this point, someone hired by the executive director of the Industrial Commission will review each comment to distill the concerns and recommendations and summarize them for the permitting staff.

Helms said of the 12 to 20 permit applications the department receives each day, he expects one or two to trigger this process, although operators may begin to entirely avoid applying for drilling permits in those areas since it could bring delays. He said it will be a slower, more deliberate process on public lands.

Anyone can access the daily activity report on the DMR website to find relevant applications that include the location, operator and type of well. That information can be used to locate the site on the website’s GIS mapping system.

“You’ll be able to see that section of land and turn on the aerial photograph,” Helms said. “So all the tools will be there electronically to do it very easily.”

DMR will seek comments that are science-based and technical such as wildlife impacts, visibility, noise or sensitive species because they will have value in determining whether a permit needs to be put on hold for further discussion.

“If there is a frequent visitor who always camps or hunts in an area, or there are fossils, or a homestead cabin site, those are pieces of information that the oil and gas operator or my staff would not know,” Helms said.

Oil operators feel the removal of private property from the proposal was a step in the right direction, as they felt the commission vastly overstepped its bounds by allowing third parties to comment.

“There’s a fence around a national park for a reason,” said North Dakota Petroleum Council President Ron Ness. “We’re getting this presumption that they expect the a pristine viewscape, but look at the history of the Badlands; ranching and energy development have been there for years … they are a part of our history and culture.”

Ness said the policy may result in some functions being moved to private land, putting more pressure on private landowners.

“It was prudent to try to assess how this is going to work and make a much smaller footprint, but if there were a more clear understanding of what was already being done … the reviews and thought process is substantially higher than what the skeptics think,” Ness said.

He’s concerned the policy throws open the door for out-of-state anti-fossil fuels groups to push their agenda within the state.

“If you give them the opportunity, they will eventually find a way to make it more and more difficult,” Ness said. “Those aren’t well-intentioned, North Dakota-type thought processes. Those are very deliberate attempts to hijack, delay and obstruct the process of energy development.”

Perhaps the greatest fear of industry is being weighed down by the continual addition of more stipulations on permits. Recently, the Industrial Commission added natural gas capture plans and the need for leak-proof containers at every well site for oil waste to be included with applications.

“We continue to pile on things, and while some are absolutely necessary, there are others we just have to continue to go through the long process,” Ness said. “Pretty soon it becomes a burdensome process and that’s not a wise use of the (DMR’s) time when they have a tremendous workload already … you start to lose focus of the real core mission.”

Helms keeps a close eye on how new regulations impact the process, but has come to realize that some regulatory cost is necessary.

“We need to be very watchful of that and really base our changes on science and things that will make a difference,” Helms said. “We don’t want the kind of things that have happened to the federal permitting process to take place here where we see something that  used to, and should only, take two to four weeks turn into something that takes two to four years. It’s a concern and we will be watching and monitoring it.”

Landowners were concerned with the original policy that allowed public comment on private land. Goehring was prepared to vote against the policy to avoid unintended consequences to farmers and ranchers, but once the private lands piece was eliminated, he reconsidered.

Vice President of the Northwest Landowners Association Troy Coons said many in his organization’s membership were apprehensive of the policy, but relieved when private lands were taken off the table.

“A lot of the people are really concerned if something like that moves forward,” Coons said. “It could have been a lot different than that.”

But Stenehjem has stressed from the beginning that he understands private property owners have rights to develop their minerals.

“We do not seek to provide any prohibitions on that right, just an opportunity to provide public comment in the process,” Stenehjem said. “Let’s have discussion about reducing impact, painting a rig, planting a tree. This is entirely in the purview of what this commission is supposed to do.”

When the commission removed the private lands aspect of the policy, the Executive Director for the Badlands Conservation Alliance Jan Swenson was greatly disappointed. While she appreciated the commission’s efforts, she did not agree with dividing the acreages.

“It kind of does away with the point of having the policy at all,” Swenson said. “The sooner we get on this the better, or we can just say goodbye to it all.”

Don Morrison of the Dakota Resource Council felt the original policy was a step in the right direction because it emerged from people in the state finally having a voice.

“We like to have a process where people’s concerns can be heard, where they’re much more thoughtful of where we put oil rigs and pipelines and roads as we develop,” Morrison said. “We’re not anti-drilling, but it’s how it’s done, and we can do it right.”