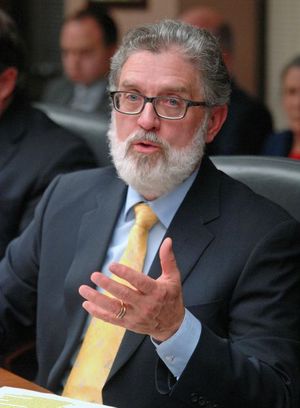 Sixty-six bills related to the oil and gas industry are being tracked by Lynn Helms, the director of the Department of Mineral Resources.

Of those, 27 bills could directly impact department operations. Some of them are concerning to the state’s top regulator.

The introduction of SB2366 follows through on a promise made by Democratic-NPL Party leadership a year ago to introduce such legislation.

“It would pretty much have to move the core library to the Department of Commerce,”said  Helms, who added staff would need to be moved to Commerce’s authority.

“They may not necessarily understand the Department of Mineral Resources’ role in all of that,” Agriculture Commissioner Doug Goehring said.

Helms said these bills would increase the department’s workload by hundreds of cases annually in which the volume of gas flared and value of gas flared would need to be determined for purposes of royalty payments.

“In my opinion, this doesn’t add anything to the gas capture plan,” Helms said.

The commission approved rules last year setting benchmarks for the reining in of natural gas.