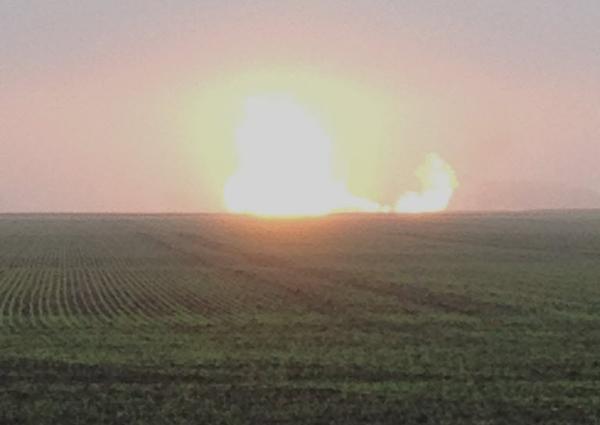 We have exclusive video from the actual point, where that pipeline exploded, near Warren, Minnesota on Monday.Officials have ruled that explosion in a Viking, natural gas pipeline was accidental. But, the cause of the explosion hasn’t been determined yet.

This Viking natural gas pipeline exploded just before 6:30 a.m. Monday. It happened in a farm field, so there were no injuries and no other property damage.

David Nelson, Witness: “It was rattling for about an hour.”

Today, crews were busy replacing a 40-feet long section of steel pipe that was blown from the ground. Large, shredded pieces of the pipe were scattered 40 yards away and more.

Sheriff John Novacek says the original crater created by the blast was 15 feet deep and 30 feet across.

The Sheriff says from a criminal standpoint, the explosion has been ruled accidental. He says when they arrived on the scene, there were no tracks leading down muddy roads in any direction to the point, where the underground pipeline exploded.

Investigators from Viking Pipeline and Minnesota Pipeline Safety are still trying to determine what caused the blast.  Meanwhile, as officials continue the search for the cause of the accident, 675 natural gas customers in Warren remain without service.

Reporter: “So, you guys are out of luck for coffee today?”

Businesses like Melodies Cafe were closed today, because of no natural gas for cooking.  In the meantime, crews remain at work trying to restore natural gas service.

A spokesperson from Viking Pipeline says it hasn’t been determined yhasn’twhen the repairs will be completed.

No injuries or property damage following a natural gas pipeline explosion in northwestern Minnesota this morning.

It happened in a farm field in the underground, Viking Gas Company pipeline, 3 miles north of Warren at 6:25 a.m.. Tyler Miller lives less than a mile away.

Tyler Miller, Warren, MN: “It sounded like thunder. I didn’t’t think anything of it. I looked out and all of a sudden shooting flames out of the ground. I shook the house, pretty loud.”

Reporter: “Did it continue to make a big noise?”

Miller: “Yeah, up until I even left this morning at a quarter to seven it was still… the house was shaking. It was roaring.”

Miller, along with a dozen other people in a 2-mile radius were evacuated by emergency responders. The pipeline was shutdown and fire crews kept their distance, waiting for the gas to burn out.

Josh Johnston, Emergency Manager: “We evacuated the area and then setup a perimeter to keep people out of that area.”

Reporter: “And just wait for the fire to go out?”

Johnston: “Yes, and that’s what pipeline training says is the safest way.”

No one was injured in the explosion. However, the natural gas pipeline had to be shutdown. So, the surrounding communities of Warren and Argyle are without natural gas service.  By 8:50 a.m. the fire burned itself out, leaving behind a massive crater.

Reporter: “What caused it… who knows?”

Josh Johnston: “We don’t know at this time what caused it.”

Viking Pipeline spokesperson, Megan Washbourne says, the City of Argyle now has its natural gas service restored. She says, 675 customers in Warren are still without it. But, contractors are the scene, repairing the break.

Washbourne says the natural gas in that pipeline was flowing at a pressure on 825 pounds per square inch.

8:45 a.m. Update: News release form Marshall County sheriff –>
On Monday May 26, 2014, at Approximately 6:25 AM The Marshall County Sheriff’s Office received a 911 call of a very large fire in Section 16 of Warrenton Township about 3 miles NW of Warren. It was determined that a underground Natural Gas line running through that area had somehow ruptured and ignited in flames.
The Sheriff’s Office, Warren Fire, Argyle Fire, Alvarado Fire and Warren Ambulance responded to the scene with assistance from the MN State Patrol and The Marshall County Emergency Management.
The gas line is owned by Viking Gas Transmission Company who is also working on the situation. Local residents within 1.5 to 2 miles were evacuated.
The natural gas supply to the city of Warren & Argyle will be shut off this morning due to the leak and the line being shut down.
The Sheriff’s Office is asking the public to stay away from the scene.
The incident remains under investigation.

8:30 a.m. Update: Valley News Live reporter Neil Carlson has confirmed there are no injuries from a pipeline explosion in Polk County. Natural gas service to at least Warren and Argyle, Minnesota, has been interrupted. Gas to that section of line has been shut off and emergency managers are allowing the fire to burn itself out.

Original story: The Marshall County, Minnesota, sheriff’s office is confirming it is investigating an apparent pipeline explosion Monday morning near the city of Warren. No word yet on any injuries.
A Valley News Live viewer lives about a mile from the scene and says he heard what sounded like huge thunder around 6:30 a.m., then a series of bangs. He went outside and saw part of the fire ball.
He say it’s about three miles north of Warren along Highway 75.