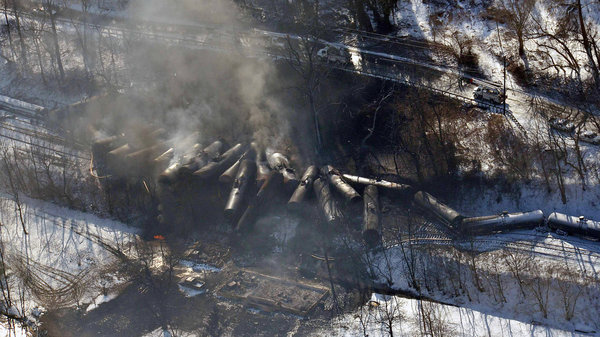 Wreckage from a train derailment this week in West Virginia.
ASSOCIATED PRESS

With the fires gone and the wreckage mostly cleared from the site of last Monday’s oil train derailment in West Virginia, state leaders are puzzling over how to prevent another disaster.But the derailment triggered another response halfway across the country in North Dakota’s Bakken Shale play, where the oil on the ill-fated CSX Corp. train originated.

Though the cause of the derailment is still unclear, investigators with the Department of Transportation said they would test the crude to see if its chemical properties played a role in the initial tank car failure.

“We continue to look into the composition of Bakken crude oil, which is why we took samples of the product to verify appropriate classification and whether emergency responders received the accurate information to respond to this derailment,” said Tim Butters, acting administrator of the DOT’s Pipeline and Hazardous Materials Safety Administration.

Nearly two dozen derailed tank cars ultimately caught fire in the accident, engulfing a nearby house in flames. The elderly man inside at the time narrowly managed to escape without serious injury (EnergyWire, Feb. 20).

The West Virginia derailment wasn’t the first time Bakken crude has been involved in a major crash: Oil trains have also exploded in Casselton, N.D.; Lynchburg, Va.; and Aliceville, Ala., among other places. In July 2013, a 72-car train carrying crude from North Dakota derailed and burst into flames in Lac-Mégantic, Quebec, killing 47 people.

But the most recent explosive crash has raised questions about whether pending rules in North Dakota go far enough to “stabilize” light crude oil produced in the state and shipped out by rail.

To what extent the volatility of Bakken crude oil should factor into any safety rules is still a matter of debate. The oil industry has called for closer scrutiny of tank car integrity and track maintenance, while others have suggested curbing oil train speeds or installing better brakes.

For the Dakota Resource Council, responsibility for the damaging West Virginia derailment “is squarely at the feet of North Dakota officials from Gov. [Jack] Dalrymple on down for their inept handling of regulating oil extraction in North Dakota,” the group of landowners and environmentalists said in a statement.

The DRC added that state regulators “could make sure oil is safe before it’s put on trains,” referring to stabilization. “But they’ve refused to do that.”

An editorial in the Fargo Forum likened the DRC’s accusations to “blaming a logger in Oregon for a house fire because wood burns,” also citing the new volatility standards as an example of progress.

That North Dakota Industrial Commission order stopped short of calling for costly stabilization facilities and instead required simple heater treaters to lower crude’s vapor pressure, a measure of dissolved gases that are more prone to ignite.

Calls for tighter stabilization rules may fall flat until the order comes into effect this April, according to Kevin Book, managing director at ClearView Energy Partners.

“We don’t know if this has changed anything or not,” Book said of the order. “What we do know is that, had it been in place when this [derailment] happened, it would have created a much stronger impetus for federal intervention.”

The Department of Transportation likely won’t step in until North Dakota’s approach gets a chance to play out, Book explained, although he said the agency would continue to collect data on vapor pressure and other chemical properties.

The 3.1 million gallons of oil in the train that derailed near Boomer, W.Va., may have already been conditioned to comply with North Dakota’s new standards. When he announced the order in December, Dalrymple said most producers in the state were already using heater treaters and wouldn’t need to change their practices.

Since then, even more drillers have fallen in line with the conditioning standards, according to Tessa Sandstrom, spokeswoman for the North Dakota Petroleum Council.

She called the West Virginia derailment an “unfortunate incident” and said the industry has pushed for a “comprehensive approach” to rail safety.

But when it comes to Bakken crude’s chemical properties, Sandstrom pointed out that “no amount of conditioning or stabilization can change crude oil from being classified as a flammable liquid.”

“That is what makes it desirable in the market,” she said. “It is a precursor for fuels: gasoline, diesel and jet fuel — all of which are flammable liquids.”