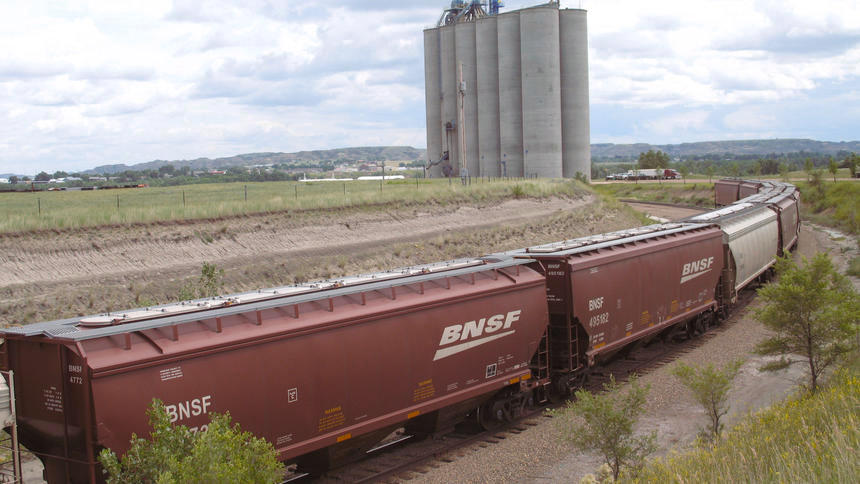 North Dakota farmers will have more options for shipping by rail under a deal signed Wednesday, agricultural officials say.

Under the agreement, the Port of Vancouver, which is the third largest port in the state of Washington, will send rail cars to North Dakota delivering lumber, paper, cement, fertilizer, energy supplies and other goods. Such cargo is already moving east from the Pacific Northwest, North Dakota Agriculture Commissioner Doug Goehring said.

After they are unloaded, the cars will be filled with North Dakota soybeans, lentils, flax, buckwheat, dry beans and other crops, — both bulk and specialty — that will be shipped west, either for distribution or international export.

“We cannot store our way to prosperity,” Goehring said, referring to the fact that North Dakota’s agricultural products haven’t been able to travel by rail at the rate they’re being produced.

It’s a growing concern in a state where heavy oil traffic on rails has caused delays for other freight shipments. Some say crops have taken a backseat to oil, which primarily uses rail to ship out of state.

The partnership will begin with two shuttle trains a month and work its way up to four, said Todd Coleman, CEO of the Port of Vancouver USA.

Goehring and Coleman signed a memorandum of understanding Wednesday and said they hope to start in a couple of weeks, around mid-September.

Goehring said the service will be dedicated to moving products out of the Upper Midwest — and moving more than the three biggest crops.

“We produce more than just corn, soybeans and wheat, and that isn’t to say that those aren’t vitally important … but we also grow almost 50 different commodities commercially in North Dakota,” he said.

There are 392 elevators in the state, and all could be affected by the new partnership, Coleman said.

Eighty-two percent of grain and oilseed products are moved by rail, Goehring noted.

Not everyone is sold on the plan.

Bob Sinner, a partner with the Sinner Bros. & Bresnahan agribusiness, was at the announcement Wednesday to question what the proposal means for identity-preserved grains, a specialty crop.

The partnership’s plan would move IP grains via boxcar from North Dakota to the Pacific Northwest, then transload them into containers at the port. Sinner sees that as a food safety concern.

“Our customers, worldwide, want us to load containers at our facilities and ship them without anyone touching the product,” he said. “Bringing boxcars of products into the state and then transloading IP grain products onto boxcars is not of interest to us.”

Goehring assured Sinner the boxcars would be sterilized, and Coleman said the Port of Vancouver has two facilities certified for food-grade processing.

Another question was whether the new trains would still depend on BNSF Railway and Canadian Pacific Railway tracks, where recent grain delivery backlogs have drawn national attention.

The answer is they would.

But Coleman said it’s not track time so much as boxcars that are in high demand. Previously, trains for agriculture shipments were unreliable, he said, and had to be sourced from the marketplace.

Now, with 180 boxcars that exist solely to return to the West Coast bearing North Dakota products, “we’re gonna have a dedicated rail service,” he said.

Companies also have been discussing an oil export terminal at the Port of Vancouver.

An analysis prepared for the companies, released Friday, estimated an oil export terminal at the port of Vancouver could generate an estimated $2 billion in economic value.

Most of the money would go to workers operating the terminal and those that support operations over 15 years.

The analysis was released by Vancouver Energy, the joint venture of Tesoro Corp. and Savage Companies.

The Washington state Energy Facility Site Evaluation Council is expected to make a recommendation next year to Gov. Jay Inslee.

The terminal would take oil trains from North Dakota and transfer the oil to barges for West Coast refineries.

(The Associated Press contributed to this report.)