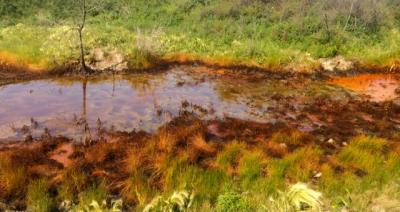 Researchers found high levels of ammonium, selenium, lead and other toxic contaminants as well as high salts in the brine-laden wastewater, which primarily comes from hydraulically fractured oil wells in the Bakken region of western North Dakota.

In 2015, members of Dakota Resource Council accompanied Dr. Avner Vengosh and others from Duke University to spill sites to collect samples, also taking them on a tour of the Mandaree area. At one site, the researchers were still able to detect high levels of contaminants in spill water four years after the spill occurred.

Soil at the spill sites was contaminated with radium, a naturally occurring radioactive element found in brines, which chemically attached to the soil after the spill water was released.

“Until now, research in many regions of the nation has shown that contamination from fracking has been fairly sporadic and inconsistent,” said Dr. Avner Vengosh, professor of geochemistry and water quality at Duke’s Nicholas School of the Environment. “In North Dakota, however, we find it is widespread and persistent, with clear evidence of direct water contamination from fracking.”

“The magnitude of oil drilling in North Dakota is overwhelming,” Vengosh said. “More than 9,700 wells have been drilled there in the past decade. This massive development has led to more than 3,900 brine spills, mostly coming from faulty pipes built to transport fracked wells’ flowback water from on-site holding containers to nearby injection wells where it will be disposed underground.”

As part of the study, the team mapped the distribution of the 3,900 spill sites to show how they were associated with the intensity of the oil drilling.

North Dakota’s unconventional oil production grew from about 100,000 barrels a day in 2007 to more than 1 million barrels a day in 2014. Much of the increased production has been made possible by advances in hydraulic fracturing and horizontal drilling. The industry’s expansion in North Dakota has fueled economic growth, especially on tribal lands and in rural areas, but also has sparked concern about drinking water contamination.

“Unlike spilled oil, which starts to break down in soil, these spilled brines consist of inorganic chemicals, metals and salts that are resistant to biodegradation,” said Nancy Lauer, a Ph.D. student of Vengosh’s who was lead author of the study. “They don’t go away; they stay. This has created a legacy of radioactivity at spill sites.”

Soil samples collected downstream from spill sites contained higher levels of radioactivity than soil at the spill sites themselves, Lauer noted. This suggests that radium builds up in the soil as the spilled brine flows through the environment.

Lisa DeVille, DRC board member from Mandaree, said that having accurate information is vital and continues to call for ongoing monitoring, research, testing, and studies to show the environmental and human health impacts of exposure. “We knew there was contamination happening from seeing the effect of oil and gas on our daily lives,” she said. “We need neutral, third-party data like this study because our attempts as citizens to find out what exactly is getting into our water seem to meet wall after wall.”

As part of their study, the researchers collected samples of brine-laden spill waters from four sites – two large spills and two smaller ones. They measured and analyzed the samples for inorganic contaminants and to identify the unique isotopic signature, or fingerprint, of Bakken region brines. By comparing this fingerprint to the geochemical and isotopic profiles of 29 background surface water samples collected across the region, the team was able to determine where and to what extent contamination associated with brine spills had occurred, and rule out the possibility that it had been caused by other sources.

“These isotopic tracers give scientists powerful forensic tools for tracking the presence of spill waters in the environment,” Vengosh said. “Given that spills can occur upstream from drinking water sources, long-term monitoring of downstream waters is necessary to assess impacts on water quality.”

One of the state’s largest spills to date occurred in 2014, when an underground pipeline leak caused approximately 1 million gallons of brine to flow down a ravine and into Bear Den Bay, about a quarter mile upstream from a drinking water intake on Lake Sakakawea.

“Many smaller spills have also occurred on tribal lands, and as far as we know, no one is monitoring them,” Vengosh added. “People who live on the reservations are being left to wonder how it might affect their land, water, health and way of life.”

“No matter what jurisdiction these spills are happening in, we must figure out both how to handle them and how to prevent them,” DeVille said. “This kind of contamination is an immeasurable cost to tribal members across North Dakota who face virtually unregulated oil and gas development that has clear and lasting impacts downwind and downstream.”

Funding came from the National Science Foundation and the Natural Resources Defense Council.

Photos from the collection study can be found here: https://nicholas.duke.edu/about/news/ContaminationinNDLinkedtoFrackingSpills

A copy of the report can be found here: Duke Univeristy Report: Brine Spills Associated with Unconventional Oil Development in North Dakota