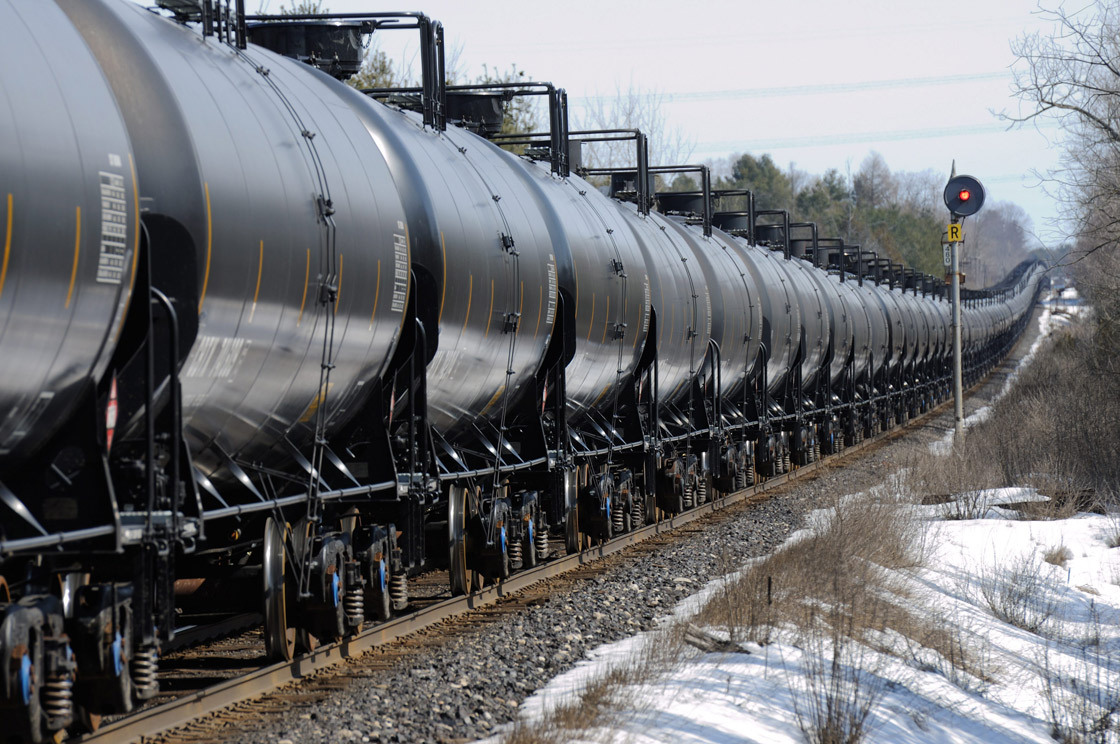 The recent surge in oil train traffic along North America’s freight network has been a boon for railroads struggling to cope with falling coal shipments.

But though the crude-by-rail boom has kept workers busy, it has also raised questions about their safety and preparedness following a series of oil train derailments and explosions.

A tentative agreement between BNSF Railway Co. and a major transportation union last month would allow certain trains to operate with just one engineer on board, provided they were outfitted with Positive Train Control. PTC technology allows for the train to be stopped or slowed automatically if it exceeds a speed limit or is on track for an unseen collision.

BNSF spokeswoman Roxanne Butler pointed out that the PTC labor deal would not apply to any trains hauling hazardous materials such as crude oil. The agreement is now being considered by members of the International Association of Sheet Metal, Air, Rail and Transportation Workers’ Transportation Division (SMART TD).

But union representatives have worried that the agreement could clear the way to phase out oil train conductors in the future, setting what they consider a dangerous precedent.

“You can’t talk about this issue without mentioning the terrible lessons that we learned at Lac-Mégantic,” said SMART TD National Legislative Director James Stem, referring to a fiery oil train derailment and explosion in Quebec last year that killed 47 people.

The train was not manned when it jumped the tracks in downtown Lac-Mégantic, but it had been operated by a lone engineer the previous night. The worker is now facing charges of criminal negligence for allegedly failing to apply enough hand brakes that could have prevented the train from breaking free from its parking place and hurtling toward town.

In that case, Stem explained, safety “had nothing to do with the size of the tank car — it had to do with management decisions that were made based around the fact that they had a crew of one.”

“Based on our experience and multiple fatalities, a crew of at least two certified employees is necessary for the safe operation of the train,” he said.

The Federal Railroad Administration, part of the U.S. Department of Transportation, is now crafting regulations that will likely require oil trains to be staffed by at least one conductor and one engineer. An FRA spokesman said the regulator expects to issue a notice of proposed rulemaking on the topic by the end of the year.

But in a statement supporting the FRA’s two-person crew proposal in April, Edward Wytkind, president of the Transportation Trades Department at the union confederation AFL-CIO, noted that railroads’ “previous collective bargaining pursuits have included attempts to employ one-person crews.”

Railroads have sought to use smaller crews in recent decades to cut down on labor costs, arguing that technologies such as PTC and improved operating practices preclude the need for many workers. But regulators and labor groups have maintained that larger crews boost safety.

‘We don’t believe in jobs at any cost’

Crude-by-rail shipments have shot up from fewer than 10,000 carloads in 2008 to more than 400,000 carloads last year, according to data from the Association of American Railroads.

A single mile-long oil train can carry millions of gallons of oil in 100 or more tank cars. Federal rules require such trains to put at least one “buffer car” of some benign material — like sand — between the locomotives and the tank cars to protect workers.

Stem of SMART TD said railroads have a “fairly good safety record” when it comes to crude-by-rail, which he sees as more of an opportunity than a threat. He said “any new commodity that comes in large quantities brings some challenges to safe transportation” but added that rail workers are ready to handle it.

In Vancouver, Wash., the local arm of the International Longshore and Warehouse Union (ILWU) has opposed a planned oil-by-rail terminal that would be jointly run by refiner Tesoro Corp. and Savage Cos.

On July 18, members of ILWU Local 4 hoisted a banner at the Port of Vancouver protesting the “unsafe oil” that would be brought to the proposed Tesoro/Savage facility.

ILWU Local 4 President Cager Clabaugh said that although the 360,000-barrel-per-day terminal “would benefit” dock workers, “we chose to oppose it because we don’t believe in jobs at any cost.”

“We’ve been seeing that this [oil] is super-dangerous and the industry has basically proven in the past year and a half that they cannot handle their product safely,” he said, citing the Lac-Mégantic disaster and a Dec. 30, 2013, derailment and fire near Casselton, N.D.

“If they call us to do the work, we’re not going to refuse it,” Clabaugh added. “We hope that there would be adequate training available.”

Tesoro spokeswoman Jennifer Minx pointed out in an emailed statement that the company’s crude-by-rail unloading terminal in Anacortes, Wash., has operated “without a spill or injury” since it opened two years ago.

She said that if the Vancouver project moves forward, all employees will undergo “hands-on” terminal, rail and marine testing programs before going to work.

“Crews will undergo training that exceeds regulatory standards,” she said.

Freight rail companies such as BNSF have installed their own training regimens for employees working with hazardous materials such as crude.

The industry has pumped millions of extra dollars in recent months into oil spill preparedness and emergency response training.

Still, railroads aren’t held to a federal standard when it comes to security training, drawing ire from some union officials.

In 2007, the Implementing Recommendations of 9/11 Act tasked the Department of Homeland Security to establish a base-line training program for mass transit, rail and bus employees.

But the DHS has yet to publish rules to set up the program, which would prepare employees for handling security threats and emergency conditions. In 2013 the agency formally requested comments and data “on employee security training programs and planned security training exercises currently provided by owner/operators of freight railroads, passenger railroads, public transportation systems (excluding ferries), and over-the-road buses,” but the regulator has yet to follow up with a rule. A DHS official said the agency continues to work on the issue.

The wide-reaching 2007 9/11 Act separately expanded protections for rail employees by preventing railroads from firing workers for reporting information “regarding any conduct which the employee reasonably believes is a violation of any Federal law, rule or regulation relating to railroad safety or security.”

Larry Willis, secretary-treasurer of the Transportation Trades Department at AFL-CIO, said in an interview that “workers are often called the eyes and ears of their respective industries — without proper training, they can’t in a comprehensive manner contribute to the security of the systems in which they work.”

Willis acknowledged that a number of railways have implemented their own security training programs.

“But the whole point of the 9/11 Act provisions is to ensure that all employers across the sector have a base-line level of security,” he said. “It’s not a complicated issue, quite frankly — Congress puts forth good training mandates, and those mandates need to be followed.”