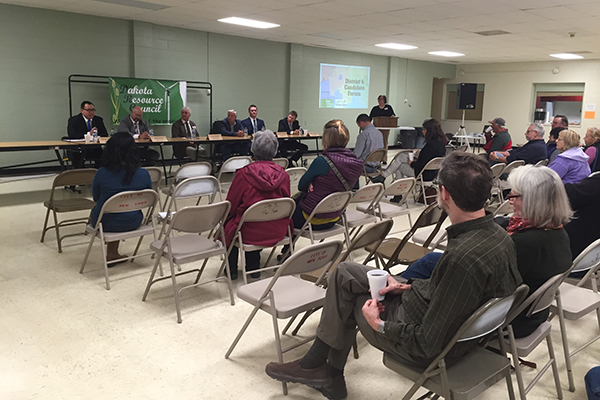 “It was interesting to hear agreement among candidates from both sides of the aisle. All of the candidates stated existing oil and gas rules need to be enforced, and all of the candidates agreed one person cannot be both a promoter and a regulator of the oil industry,” said Carol Ventsch, DRC member and District 4 voter. “These are issues DRC has been speaking out on for years. We are counting on strong representation from District 4 to hold state agencies accountable.”

The candidates each had an equal opportunity to talk about why they are running and to share their perspectives on what changes to make during the 2017 legislative session and beyond. Most candidates were in agreement when it came to responsible regulation of oil and gas and how the state is failing tremendously with enforcement.

“A couple things we need to change – the Director of Oil and Gas Division needs to be two positions, one as a regulator and one as a promoter,” said current House representative Kenton Onstad, DNPL-Parshall. “Can’t hardly ask somebody to promote the oil industry and then turn around and regulate it. In most states, that position is separated out. Nobody is stopping the industry, we just want to move forward.”

“We need to enforce the good laws on the books, we don’t need any new ones. If that means a change in leadership, that’s what it means. If you fail to do your job, you get fired, they replace you,” said Bill Oliver, candidate for State House. “I’m a damage prevention specialist with a pipeline company. We pride ourselves on doing things safer. I know these lines are safe that are going into the ground. We have to focus on the enforcement of the rules currently there. Right now the rules are good that are on the books. Trust me, I had to study them for 6 months before I could get certified to do my job. ND is the No. 1 safest pipeline state in this country.”

“It is about compliance, and when I hear responsible development, we need to embrace development. It means building partnerships and working with industry, however, it also reads as holding industry accountable. This hasn’t been part of the equation. We need to hold industry and state leaders accountable,” said Cesar Alvarez, candidate for State House. “It is about partnerships. They are here, they have workers here, and they have equipment, operations, and machinery here. But we have to make them understand that they are here in communities, and the communities have been here before – they were here and they will be here after.”

“I appreciate the oil industry in ND because that is what brought me here. I’m also a farmer and rancher at heart because that’s what I’ve done my whole life,” said Terry Jones, State House candidate. “Thank God for North Dakota, because it has been one of the shining stars in the nation. I’m hoping I can bring some of the things they do in Wyoming to North Dakota when it comes to protecting the landowners.”

“Before oil came, small towns were declining and we were losing people. A lot of good has come with the money from oil. Young people have moved back and are supporting their families,” said Tyler Stafslien, State Senate candidate. “However, there are certain issues, like oil wells right next to Lake Sakakawea, slaps on the wrist for oil companies, and radioactive material dumped in landfills were it shouldn’t have been done.”

Each candidate answered a question on what they would do to ensure family farms and ranches thrive in North Dakota. The Measure 1 victory, which rejected corporate farming was defended vigorously by farmer and candidate Stafslien, a fourth-generation farmer.

After ending with questions from the audience, the candidates gave closing statements and made the case for why they should represent District 4.

Election Day is Tuesday, Nov. 8, but early voting is now open in North Dakota. Please visit the North Dakota Secretary of State’s office for the best information on voting.

Want to make change in North Dakota during the legislative session?

DRC members are invited to participate in our November 19 Legislative Training – check our Events calendar for more information or contact any DRC organizer. This is one of the best opportunities to work toward making North Dakota the best it can be. The training will be held in Bismarck and facilitated by Kevin Williams, a fearless facilitator who has worked for the Western Organization of Resource Councils (WORC) as a trainer for more than 30 years.