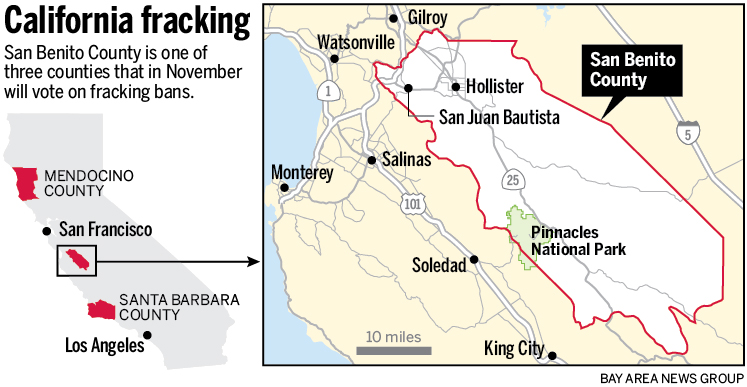 SAN JUAN BAUTISTA — When President Ronald Reagan was pushing for offshore oil drilling on the edges of Monterey Bay in the mid-1980s, Santa Cruz voters fought back, approving a ballot measure that banned construction of all storage tanks, pipelines and other oil equipment in the city.

The small protest vote was soon copied by 25 other coastal communities, from San Diego to Fort Bragg, helping to kill the oil industry’s drilling plans.

Now, nearly 30 years later, the same David vs. Goliath tactic is being used farther from shore. Activists in San Benito County have placed a closely watched measure on the Nov. 4 ballot to outlaw hydraulic fracturing, the controversial oil-extraction technique known as fracking.

San Benito was the first California county to decide to take the issue to the voters. Campaign ads bankrolled by the oil industry are filling TV and radio airwaves, claiming that a fracking ban would hurt the county’s economy and trample property rights. And the issue is straining longtime friendships among farmers and ranchers.

Supporters of Measure J say they are frustrated that Gov. Jerry Brown and state lawmakers have not banned fracking, a process that involves pumping water and chemicals underground to release oil and gas — so they decided to go around them.

“I’m hoping every community in California will emulate this,” said Andy Hsia-Coron, a retired schoolteacher in San Juan Bautista who backs the measure. “Too many decisions are compromised by money. We have more potential for democracy reviving itself at the local level.”

San Benito County has rarely been a political battleground of statewide significance.

The rural region on the southern edge of Silicon Valley has only 24,000 registered voters. It is best known for cattle, Pinnacles National Park and a 1947 motorcycle brawl in the county seat of Hollister that inspired the Marlon Brando movie “The Wild One.”

Already, Santa Barbara County environmentalists have copied the San Benito measure and placed it on the November ballot there. A similar measure is on the ballot in Mendocino County, and Butte County has one proposed for 2016.

The oil industry, trying to prevent the dominoes from falling, is fighting back vigorously.

A coalition funded by Chevron, ExxonMobil, Occidental Petroleum and other oil giants has donated $1.8 million to the opposition campaign in San Benito County, outspending supporters 15-1. The coalition also gave $5 million to the no effort in Santa Barbara County.

“They didn’t get their ban at the state. Their goal is to go county by county and use scare tactics to deceive voters,” said Kristina Chavez Wyatt, a spokeswoman for the No on J campaign.

Critics say the measure goes too far by also banning commonly used oil techniques such as steam injection, in which steam is pumped underground to soften thick oil deposits. In addition to costing future jobs and tax revenue, opponents contend, limiting those practices means farmers and ranchers may not be able to earn money by selling oil and gas beneath their property.

“You work all your life; your family works all their life,” said Richard Bianchi, a third-generation farmer who grows vegetables on 1,000 acres north of Hollister. “To limit the mineral rights, that’s a Pandora’s box. You are taking somebody’s rights away.”

Bianchi, president of the county farm bureau, said he doesn’t worry about fracking or the pollution that critics say can come with it.

“I kind of equate the fracking issue to banning ice fishing in San Benito County,” he said. “There’s the same amount of fracking here as ice fishing. The oil industry says we’re not fracking now, we’re not planning on fracking and we don’t need to frack. I’m not worried about it being an issue.”

Other longtime farmers and ranchers disagree.

“This is a beautiful, productive county for agriculture. Some people want to win the lottery with oil and gas, but why would we want to take the risk?” said Joe Morris, a third-generation cattle rancher in San Juan Bautista.

Morris and other supporters say they are concerned that if the Monterey Shale, a vast oil deposit that stretches across central California — including parts of San Benito County — is ever developed, an oil boom could compete with farming for scarce water supplies. They also worry that fracking and other oil-extraction techniques could cause groundwater and air pollution, as they have in Texas, North Dakota and other states.

One company, Newport Beach-based Citadel Exploration, has plans to drill up to 1,000 wells on nearly 700 acres in a remote area near Bitterwater, on the southern edge of the county, using steam injection. In July, those plans were delayed when environmentalists sued and won a court ruling requiring more environmental study.

Citadel’s CEO, Armen Nahabedian, is a fourth-generation oil man who served in the Iraq War. He predicts the industry will sue and overturn Measure J if it passes.

“All of these recent wars and occupations that we have had are largely driven by a dependency on foreign fossil fuels — and they are entirely unnecessary,” he said. “We have the ability to be independent, and California needs to lead the charge.”

Supporters of the measure say the state needs to do more to get off fossil fuels quickly and is following in the footsteps of New York State, where more than 200 local communities prohibit fracking.

“We need Gov. Brown to put an immediate halt to fracking statewide,” said Kassie Siegel, an attorney with the Center for Biological Diversity, an environmental group supporting the measure. “But until he does, we are going to see more local governments and local residents going forward with measures to protect themselves.”