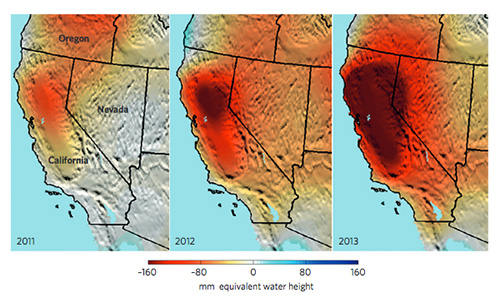 Global ground water supplies, crucial for sustaining agriculture, are being depleted at an alarming rate with dangerous security implications, a leading scientist said.

“It’s a major cause for concern because most of the places where it (ground water depletion) is happening are major food producing regions,” James Famiglietti, a University of California professor who conducts research for the National Aeronautics and Space Administration (NASA), said in an interview with the Thomson Reuters Foundation.

“India is the worst off, followed by the Middle East, and the U.S. is probably number three … the Chinese, particularly on the north China plain, are more water limited than people believe.”
–

“In 90 percent of the world where there are violent conflicts, there are water scarcity issues,” he said.

Water scarcity has been one component driving Syria’s civil war, he said. The agricultural sector lacks sufficient water to farm, and a “young generation of unhappy farmers moved to the city and conflict ensued”.

Consequently, most of the major aquifers in the world’s arid and semi-arid zones, that is, in the dry parts of the world that rely most heavily on  groundwater, are experiencing rapid rates of groundwater depletion. Groundwater is being pumped at far greater rates than it can be naturally replenished, so that many of the largest aquifers on most continents  are being mined, their precious contents never to be returned.
These include the North China Plain, Australia’s Canning Basin, the Northwest Sahara Aquifer System, the Guarani Aquifer in South America, the High Plains and Central Valley aquifers of the United States, and the aquifers beneath northwestern India and the Middle East. Nearly all of these underlie the word’s great agricultural regions and are primarily responsible for their high productivity. Climate change and associated changes to the water cycle vastly complicate the challenge of sustaining groundwater supplies for the foreseeable future.
Changing patterns of precipitation and groundwater recharge, and increasingextremes of flooding and drought are among the most palpable impacts of global change, and underscore the need to rethink stationarity in current water management strategies. As the wet, high- and low- latitude areas of the world become wetter, and the dry areas in between become drier (and already limited groundwater recharge decreases), the ‘haves’ and ‘have nots’ of the future water landscape are emerging.

The conflict between water for agriculture and consumption, and water for fossil fuel extraction, is particularly intense in China.  Water supply is the wild card, potentially a show stopper, for all those predictions of continued future coal and tracking development in Asia and elsewhere.

The confrontations between energy and water are particularly stark in China, where the water footprint of energy development and the energy footprint of water are large and growing.

Water drives the economy and dwindling supplies threaten the country’s energy production and economic growth. China’s reliance on water-intensive coal is well known: 70% of the country’s coal plants are situated in arid north and almost half of these plants are already threatened by water shortages.

Alternatives to coal, such as natural gas, nuclear and hydropower are also constrained by water availability. Nuclear power plants use an enormous amount of water for cooling. In almost all of China’s promising shale gas areas –such as the Tarim basin in the northwest – water supplies are limited. Even solar power – where China is the world’s leading market and producer  – uses water for the manufacturing of parts and cleaning panels.

Less well known is the rapidly expanding energy footprint of the water sector. Mega-diversion projects to expand water supply like the South-North Water Transfer Project (SNWTP), or the proposed Bo Hai sea water pipeline, drive up the energy costs of providing water. To pump water along the eastern stretch of the SNWTP will require the conversion of millions of tonnes of coal per year into electricity to move the water and, creating further water stress.