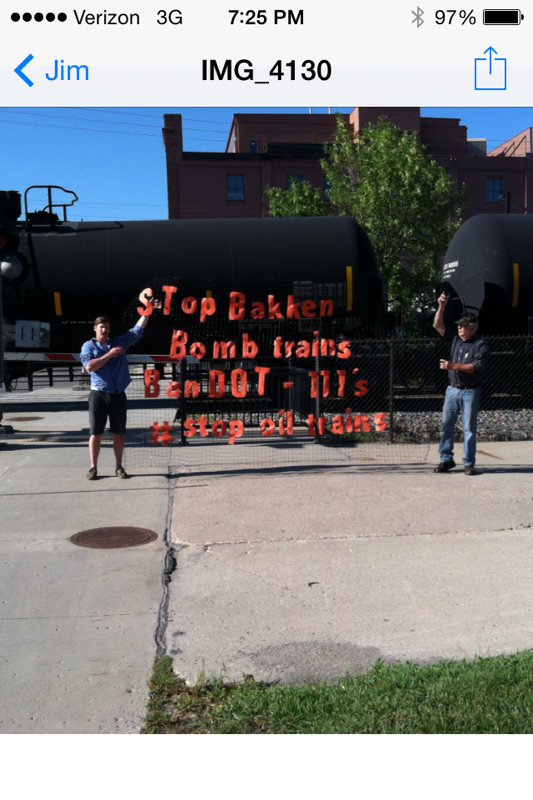 Dustin Seher, DRC member from Jamestown, ND says, “We know that there’s ways to make these cars safer. We need immediate action to remove these unsafe rail cars from the tracks and upgrade them with safer rail cars.”

A group of North Dakotans wants the state to say “NO” to bomb trains.

They say train cars that carry Bakken oil are unsafe, and are concerned there will be more deadly derailments like the one in Canada last year.

The group wants Department of Transportation 11 tank cars banned in North Dakota. Saying that another horrible accident is just waiting to happen.

Members gathered in Downtown Fargo and held a large banner right by the train tracks on Broadway. Hoping to send the message that they don’t want these “Bomb Cars,” rolling through the area.

Dustin Seher, of Jamestown, ND says, “We know that there’s ways to make these cars safer. We need immediate action to remove these unsafe rail cars from the tracks and upgrade them with safer rail cars.”

And there was a close call in Casselton, North Dakota when an oil train derailed last December. Luckily no one was injured.

We asked members about the use of pipelines to transport oil, and they say it can help, but are still unsure if it’s the safest option.

Lynn C. Wolff of Fargo says, “We’ve got some high ground water in this part of the country. And once it’s contaminated, it’s contaminated. We need to make sure that we have done everything we can do to make it safer. Both rail and pipeline.”

The group states that on average, Fargo has 40 oil trains a week travel through that are about 100 cars long and are operated by one conductor.

They also feel that the state should look at other sources for energy, such as solar and wind power.