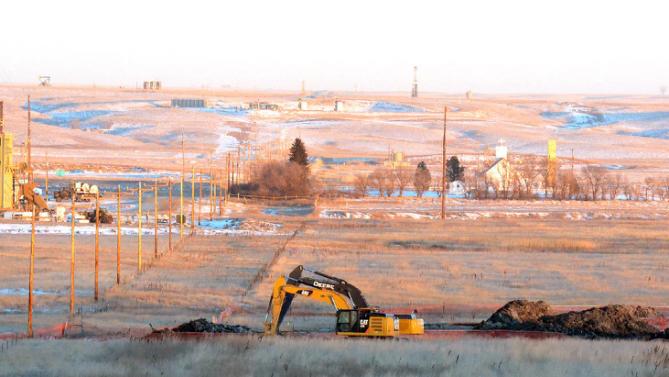 Nearly 3 million gallons of saltwater generated by oil drilling have leaked from a North Dakota pipeline, an official said Wednesday, the largest such spill since the state’s current oil boom began and nearly three times worse than previous record spills. Two creeks have been affected, but the full environmental effect might not be clear for months.

Operator Summit Midstream Partners LLC detected the pipeline spill on Jan. 6, about 15 miles north of Williston and told health officials then. Officials say they weren’t given a full account of the size until Tuesday.

Cleanup has begun and inspectors have been monitoring the area, but it will be difficult to measure the effects on the environment and wildlife until the ice melts, said Dave Glatt, chief of the North Dakota Department of Health’s environmental health section. Some previous saltwater spills have taken years to clean up.

“This is not something we want to happen in North Dakota,” Glatt said.

At the moment, the spill doesn’t threaten public drinking water or human health, Glatt said. He said a handful of farmers have been asked to keep their livestock away from the two creeks, the smaller of which will be drained.

The saltwater, known as brine, is an unwanted byproduct of oil and natural gas production that is much saltier than sea water and may also contain petroleum and residue from hydraulic fracturing operations.

The new spill is almost three times larger than one that fouled a portion of the Fort Berthold Indian Reservation in July. Another million-gallon saltwater spill in 2006, near Alexander, is still being cleaned up nearly a decade later.

Summit Midstream said in a statement Wednesday that about 65,000 barrels of a mix of freshwater and brine have been pumped out from Blacktail Creek. Brine also reached the bigger Little Muddy Creek and potentially the Missouri River.

Glatt said the Blacktail Creek will be fully drained as part of the initial cleanup, but the water and soil will have to be continuously tested until after the spring thaw because some of the contaminated water has frozen. The Little Muddy Creek will not be drained because it is bigger than the Blacktail Creek and the saltwater is being diluted.

“We will be monitoring to see how quickly it gets back to natural background water quality conditions, and we are already starting to see that,” Glatt said of the Little Muddy Creek. “It’s getting back pretty quickly.”

Summit Midstream’s chief operating officer, Rene Casadaban, said in a statement that the company’s “full and undivided attention” is focused on cleaning up the spill and repairing any environmental damage.

Spokesman Jonathan Morgan did not immediately confirm exactly when the spill began. It also was not clear what caused the pipeline to rupture. Glatt said the company has found the damaged portion of pipeline and it was sent to a laboratory to determine what caused the hole.

North Dakota has suffered scores of saltwater spills since the state’s oil boom began in earnest in 2006.

A network of saltwater pipelines extends to hundreds of disposal wells in the western part of the state, where the briny water is pumped underground for permanent storage. Legislation to mandate flow meters and cutoff switches on saltwater pipelines was overwhelmingly rejected in the Legislature in 2013.