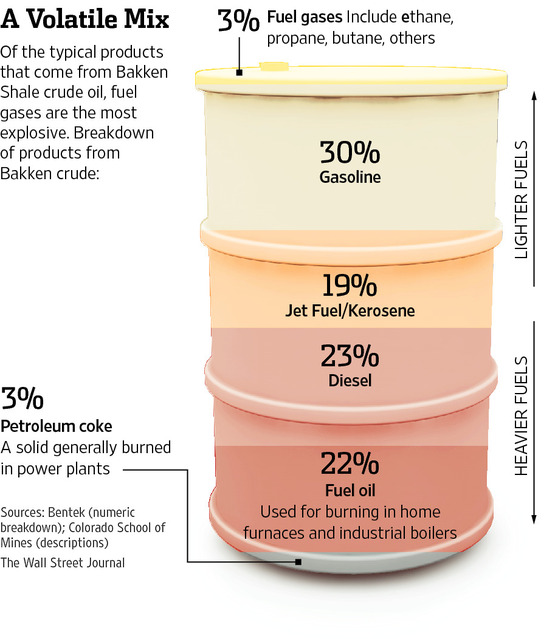 When energy companies started extracting oil from shale formations in South Texas a few years ago, they invested hundreds of millions of dollars to make the volatile crude safer to handle.

In North Dakota’s Bakken Shale oil field, nobody installed the necessary equipment. The result is that the second-fastest growing source of crude in the U.S. is producing oil that pipelines often would reject as too dangerous to transport.

Now the decision not to build the equipment is coming back to haunt the oil industry as the federal government seeks to prevent fiery accidents of trains laden with North Dakota oil. Investigators probing crude-by-rail accidents, including one a year ago that killed 47 people in Quebec, are trying to determine why shale oil has proved so combustible—a question that has taken on growing urgency as rail shipments rise.

Only one stabilizer, which can remove the most volatile gases before transport, has been built in North Dakota and it hasn’t begun operation, according to a review by The Wall Street Journal. 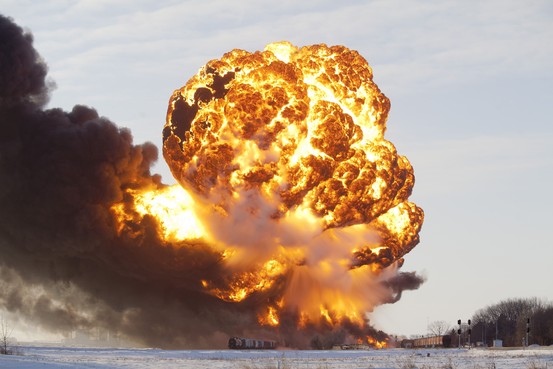 A fireball erupted from an exploding train car after a crash outside Casselton, N.D., in December. Oil from the state’s Bakken Shale isn’t stabilized to make it less volatile. Zuma Press

Stabilizers use heat and pressure to force light hydrocarbon molecules—including ethane, butane and propane—to form into vapor and boil out of the liquid crude. The operation can lower the vapor pressure of crude oil, making it less volatile and therefore safer to transport by pipeline or rail tank car.

As the Journal previously reported, oil tapped from shale is generally more volatile and more similar to jet fuel than traditional crude oil, which has seldom been linked to explosive accidents. The production of this volatile oil through hydraulic fracturing has soared, accounting for most of the additional 3 million barrels a day of oil that the U.S. produces today compared with 2009.

The federal government is weighing whether to require stabilization, holding high-level meetings with oil executives.

“We are open to any recommendations with a demonstrated ability to improve safety, including the stabilizing or further processing Bakken crude,” says Sarah Feinberg, the chief of staff to Transportation Secretary Anthony Foxx.

If the government mandates the use of stabilizers, companies would have to make big investments in equipment and might have to slow development of the Bakken oil field.

Energy executives point out that neither federal nor state regulations require crude to be stabilized before it is transported. Some say stabilization is unnecessary, noting that South Texas produces more of the highly volatile oil known as condensate.

“There is nothing wrong with the crude oil” in the Bakken, says Jeff Hume, vice chairman of Continental Resources Inc.,CLR -0.99% one of the largest crude producers in North Dakota. “It does not need stabilization.”

Robert Hall, a National Transportation Safety Board director, says the decision on whether to stabilize is driven by commercial considerations. “The regulations are silent,” he says.

About a million barrels a day are pumped from the Bakken, an oil field that has grown so fast that few pipelines exist to transport the crude. Instead, about 630,000 barrels a day travel by train to refineries on the East, West and Gulf coasts, a trend that is growing because the energy industry has found rail shipments to be more flexible than fixed pipelines.

Federal officials have expressed concern that unstabilized Bakken oil has been loaded onto trains and shipped without proper labeling or handling. Local safety officials have warned that their communities aren’t prepared to handle a derailment.

The American Petroleum Institute, a Washington-based lobbying group for the oil industry, doesn’t offer standards for how crude should be treated before being shipped. “We have not seen any data to suggest processing crude in the field reduces risk,” a spokesman says. The North Dakota Petroleum Council expresses a similar view.

But pipelines, which carry most of the crude oil moved in the U.S., at times require stabilization of oil for safety purposes, according to a spokesman for Enbridge Inc.,ENB.T +0.13% one of the biggest pipeline companies in North America.

Many industry experts and energy executives say privately that using stabilizing units would improve safety but are reluctant to make that point publicly for fear of antagonizing the companies that do business in North Dakota.

One exception is a company that has built the first stabilizer there, which is scheduled to open in the next few weeks.

“It is safer to stabilize that product before it goes into rail cars,” says David Scobel, chief operating officer of Caliber Midstream Partners LP of Denver. “It is not accurate to say, ‘If we stabilize the crude, that’s the magic solution so there will be no more fires.’ But it is more stable.”

Starting in 2008, energy companies that had been using new techniques to tap shale for natural gas began turning those methods, including fracking and horizontal drilling, on formations rich in oil. While much of this activity took place in Texas, which has a century-old oil industry, one of the most promising discoveries was in shale under North Dakota plains better known for producing wheat and canola.

Over the past six years, the industry has drilled 7,000 wells in North Dakota, almost all of them spread across about 15,000 square miles of the Bakken. Rather than installing pipelines to collect oil from these far-flung locations, companies used trucks to collect the oil and started building rail terminals to ship it by train. Crude-by-rail shipments from North Dakota have quadrupled since 2012

The most combustible components of Bakken crude—known as light ends—constitute between 2% and 11.9% of its volume, according to an analysis by the American Fuel & Petrochemical Manufacturers, an industry trade group. Other sources have a lower figure for Bakken light ends. These vaporous liquids can be valuable, but only if pipelines or special railcars are available to transport them.

Lacking that infrastructure, stripping out volatile liquids could hurt profits by reducing the volume of crude for sale. Stabilizing the crude could cut potential revenue by perhaps 2%, an industry executive estimates.

But heater treaters aren’t as precise as stabilizers and can’t remove as much volatile material, according to an executive at a company that produces both kinds of equipment.

The situation in the Bakken contrasts with the Eagle Ford Shale in South Texas. In 2012, there was basically no equipment to stabilize the crude. But companies have spent hundreds of millions of dollars to build centralized facilities and pipelines to move the resulting propane and butane to a Gulf Coast petrochemical complex.

The crude was stabilized enough to be shipped without incident through pipelines, trucks and rail tank cars, says Rusty Braziel, an industry consultant. “Over a two-year period of time, the vast majority of the problem went away.”

—Alison Sider contributed to this article.

Write to Russell Gold at russell.gold@wsj.com and Chester Dawson atchester.dawson@wsj.com