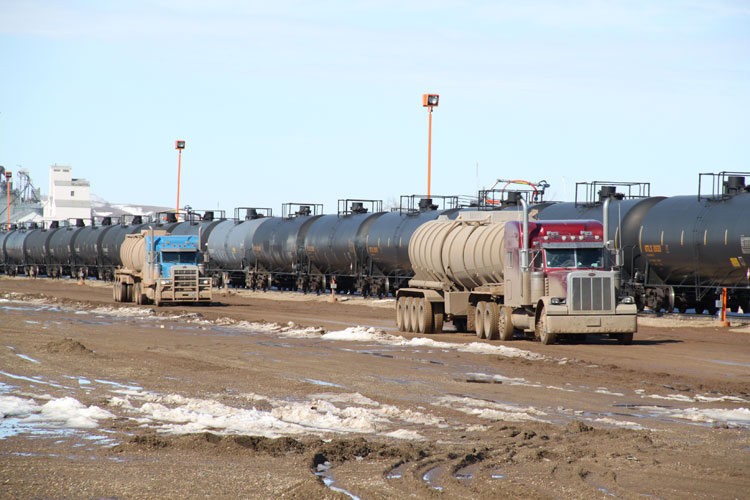 The drop in oil prices could push more oil from North Dakota’s Bakken Shale onto rails, amid a debate about how to make the state’s crude safer.

Prices for Bakken crude have fallen faster than Brent crude, the international benchmark, Lynn Helms, North Dakota’s director of the Department of Mineral Resources, said during a conference call with reporters yesterday.

Brent, North Sea oil that is typically used at refineries on the East Coast, was selling for $85.50 earlier this week, while refiners in the Midwest were paying $66.25 for Bakken oil. There aren’t any major pipelines connecting North Dakota to the East Coast, so operators have to use rail to get it there.

“The incentive is really high to go after an $85.50 Brent price,” Helms said.

Brent dropped below $84 yesterday, and West Texas Intermediate, the U.S. benchmark, fell below $81 a barrel. The Brent price has fallen 27 percent since June and is the lowest since 2010, Bloomberg News reported.

The state still lacks oil pipelines to handle its production, so about 60 percent of the crude is moved by rail.

Bakken crude has been involved in at least three fiery train crashes, including one last summer that killed 47 people in Lac-Mégantic, Quebec.

The U.S. Department of Transportation has said Bakken oil is more volatile than other types of oil, and it is considering tougher regulations that would phase out older-model rail cars, known as DOT-111s (EnergyWire, July 24).

The Wall Street Journal and other news outlets have reported that Bakken producers decided not to build stabilizing plants that strip out light, volatile liquids such as propane and butane. Those plants are more common in Texas, where the so-called light ends can be sold to nearby petrochemical plants.

DOT has hinted that it may propose further regulations requiring stabilization.

North Dakota officials, including Republican Gov. Jack Dalrymple, have questioned whether the state’s oil is being unfairly singled out, citing industry-backed studies that show Bakken oil is no more flammable than other types of light, sweet crude.

However, the North Dakota Industrial Commission, which Dalrymple leads, is considering regulations that would require stripping the light ends from Bakken oil without the cost of new stabilizing plants. Most oil wells in the Bakken already have equipment that could strip out volatile liquids if it’s used under specific conditions.

Pipelines typically require oil companies to sign long-term transportation contracts, so the near-term price of oil doesn’t affect their construction schedules as much.