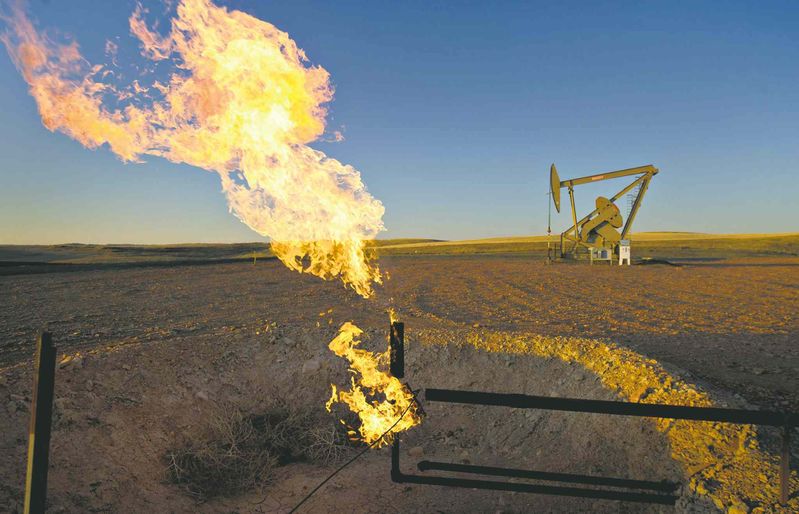 In the rush to exploit the Bakken shale formation, North Dakota sends $1.4 million a day up in smoke

“At nighttime, clouds of gravel dust from semis are lit up with flaring lights,” said Bird Bear, 62, who can see flames shooting from a well behind land where she grows red beans, corn and squash. “It’s a hellish scene.”

Twice as much natural gas is wasted through flaring than in 2012 amid an energy boom that’s propelled North Dakota’s torrid economic growth. The state’s employment expansion has been the fastest in the U.S. for four years. In the rush to exploit the Bakken shale formation, which holds the nation’s second-largest oil supply, companies from Statoil ASA to Whiting Petroleum are stepping in to try to capture more of what’s lost.

Natural gas burned in flaring is a byproduct of crude oil. Without enough pipelines to transport the gas, or the refinery capacity to process it, about a third of what’s released each day, worth $1.4 million, goes up in smoke. Tribal members say as much as 70 per cent of gas from wells on the reservation is flared.

“We’re confessing that we are flaring a tremendous amount of gas right now,” Gov. Jack Dalrymple, R, said at a February conference in Washington. “Everybody feels it’s a huge waste, to say nothing of the environmental impact.”

The energy business has been fuelling an economic bonanza in North Dakota, with jobs growth of 3.7 per cent last year, according to data compiled by Bloomberg. Nevada, ranked second, saw an employment expansion of 3.4 per cent.

As a polar vortex weather pattern caused a nationwide propane shortage this winter, energy companies in the Bakken flared gas rich in propane. More gas was flared in the state than in any other domestic oil field and at a level equal to Russia and twice that in Nigeria.

Black carbon emitted by flares and trucks affects health and contributes to climate change, according to a study by Colorado State University and the National Park Service.

Flaring will escalate as oil producers approach the milestone of one million barrels a day from the Bakken formation, a 360-million-year-old shale bed 3.2 kilometres underground. About 10,100 wells produced 29 million barrels of oil in January, according to the North Dakota Industrial Commission.

Energy executives say economic realities force them to start producing oil from wells before infrastructure is in place to haul away less-valuable natural gas. Bakken oil fetched $98.14 on April 4, while natural gas for May delivery fell to $4.439 per million British thermal units on the New York Mercantile Exchange the same day.

“We absolutely don’t want to flare the gas, that’s lost revenue,” said Russell Rankin, a regional manager for Norway-based Statoil, at a well site near the confluence of the Yellowstone and Missouri rivers.

“But if we drill a $10 million well, we’ve got lots of investors and they can’t wait to get that revenue back,” said Rankin, as a gas flare rose over land where the Lewis and Clark Expedition forged a new path through the American West.

Rankin’s company is testing a system to strip valuable propane out of the natural gas to be hauled on trucks to processing plants. The company is also conducting a pilot program with a mobile device designed by General Electric Co. to compress and store natural gas which could be used in addition to diesel to fuel drilling rigs and other equipment.

Losing out on royalties and profits from natural-gas sales, frustrated mineral owners and investors are pressuring companies and regulators to crack down on flaring.

“We’re concerned that the industry doesn’t look like it’s able to operate cleanly and that invites heavy-handed regulation and turns the public against you,” said Andrew Logan, director of the oil and gas program at Ceres, an organization of environmentalists and investors based in Boston. “In North Dakota, regulations simply make it too easy to flare.”

In Texas, where less than one per cent of natural gas is burned off, flaring is allowed for six months. In Alaska, with a flaring rate similar to Texas, producers are required to re-inject gas into the formation.

In North Dakota, energy companies can flare for a year without paying taxes or royalties.

The costs of reducing flaring are high. State regulators estimate it will take as much as $9 billion, in addition to $6 billion already invested, to build pipelines and refineries.

The state’s harsh climate limits the construction season and materials are in short supply. Twenty gas plants are online, with one being built about every six months.

“The demand for raw materials used in the manufacture of gas plants is very high,” said Jack Ekstrom, vice president of government affairs for Denver-based Whiting Petroleum Co., which is expanding two plants it built to serve the Bakken. “You don’t order these things and get them overnight, you order those things and get in line.”

About 129,000 kilometres of pipelines exist, with 3,200 kilometres, about the distance from Los Angeles to Cleveland, built in 2012. It’s not enough.

Weary from repeated visits from companies asking to build pipelines across their property, landowners are resisting signing easements.

“The day is getting done where they just wave money at us and we sign it,” said Rick Regeth, who raises cattle near Killdeer, a farming community 209 kilometres northeast of Bismarck. “You’re giving them the right to come on your property for 99 years.”

Down the road from Regeth, it took three years to negotiate an easement to build yet another pipeline on Daryl Dukart’s ranch, where he raises cows, springer chickens, ewes and hogs. The Dunn County commissioner has nine easements, including six for pipelines, on 160 acres of his 1,880-acre property.

“This one was way more restrictive on how they could use my right of way and six times the value of the others,” said Dukart, who said he hunted with Regeth growing up.

One hundred kilometres away, on the Fort Berthold reservation, Bird Bear recently received a $250 offer from a company to construct pipelines on her 70 acres.

“They want me to sign a statement allowing them to build within a half-mile of my house,” said Bird Bear, who doesn’t want equipment and workers trampling her fields. “That’s anywhere; it could be 30 feet away.”

Producers are flaring almost twice the amount of natural gas on the reservation as off of it. Regulators say the problem will worsen as 30 per cent of the 7,100 wells expected to be permitted in coming years will be drilled on native land.

Pipeline construction is complicated by canyons and Lake Sakakawea, which splits the 988,000-acre reservation in half. In addition, companies must obtain permits from the tribal council, the federal Bureau of Indian Affairs and the U.S. Bureau of Land Management. A tribal task force is considering flaring restrictions and the BLM is discussing new rules governing the practice.

“That gas can be used to power motor vehicles, to provide electricity, or heat for homes,” said Tex “Red Tipped Arrow” Hall, chairman of the Mandan, Hidatsa & Arikara Nation based at the reservation. “Right now it’s going up into the atmosphere and that’s not what we want it to do.”