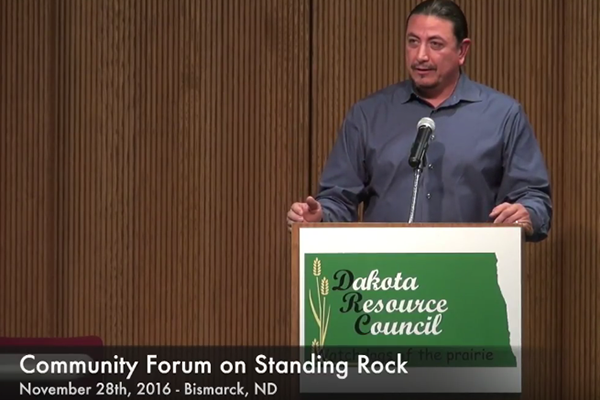 Despite the first blizzard of the season, nearly 200 people filled the room at the Bismarck Veterans Memorial Public Library on Monday, Nov. 28 to hear guests from the Standing Rock Sioux Nation talk about the Dakota Access Pipeline.

Dakota Resource Council, a community-based nonprofit membership organization, hosted the first of multiple community forums on Standing Rock and DAPL. The intent of the event was to create space for respectful, thoughtful dialogue between the community of Bismarck-Mandan and the Standing Rock Nation, something DRC hasn’t yet seen local or state leaders attempt to do.

Speakers included Chairman David Archambault II and youth Gracey Claymore and Clay Byington, both of whom are active in the youth movement, including the youth runners who traveled on foot to Washington, D.C. The format of the forum included time for each presenter and questions from the audience.

Chairman Archambault talked about the first of the tribe’s opposition to DAPL, back in 2014, in addition to a brief history about the federal government’s treatment of indigenous people and how that impacts them today. He challenged the audience to study diverse perspectives of history, especially the relationship (or lack thereof) between the federal government and tribal communities.

Archambault also described the difference between a government-to-government consultation and opportunities to participate as a stakeholder in the public input process. Because Standing Rock is a sovereign nation, they shouldn’t have been treated as merely a stakeholder.

This post will be expanded with additional quotes and coverage.

OTHER NEWS COVERAGE OF THE FORUM