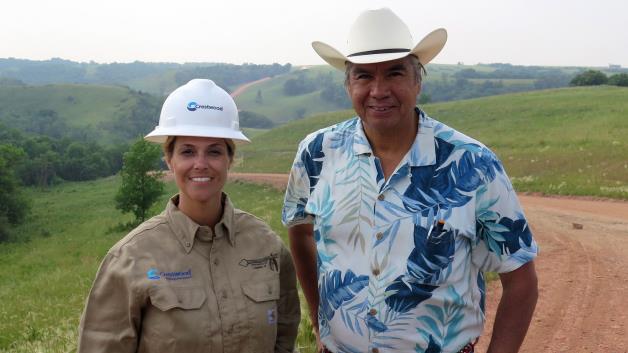 Miranda Jones, vice president of environmental safety and regulatory at Crestwood Midstream Partners, and Tex Hall, chairman of the Three Affiliated Tribes, pose for a photo near the site of a pipeline spill near Mandaree, N.D., Wednesday, July 9, 2014.

MANDAREE, N.D. (AP) — Company and tribal officials say a pipeline on North Dakota’s Fort Berthold Indian reservation has leaked 1 million gallons of saltwater, with some of the fluid finding its way to a bay that leads to a lake that provides drinking water for the reservation.

Cleanup continued there Thursday and Miranda Jones, vice president of environmental safety and regulatory at Houston-based Crestwood Midstream Services Inc., said it was expected to last for weeks.

Jones said the leak at the underground pipeline, owned by Crestwood subsidiary Aero Pipeline LLC, likely started over the Fourth of July weekend but was only discovered on Tuesday. The pipeline was not equipped with a system that sends an alert when there is a leak, she said, and the spill was only discovered when the company was going through production loss reports.

“This is something no company wants on their record, and we are working diligently to clean it up,” Jones said.

An unknown amount of the fluid entered Bear Den Bay. That bay leads to Lake Sakakawea, which provides water for the reservation, occupied by the Mandan, Hidatsa and Arikara tribes in the heart of western North Dakota’s booming oil patch. But company and tribal officials said the spill has been isolated and contained and has not impacted the lake.

“We have a berm and a dike around it, around that bay area, to keep it from going into the lake,” said Three Affiliated Tribes Chairman Tex Hall.

Saltwater is a naturally occurring, unwanted byproduct of oil and natural gas production that is between 10 and 30 times saltier than sea water. The state considers it an environmental hazard.

Kris Roberts, an environmental geologist with the North Dakota Department of Health, said damage from the toxic spill could be seen when he visited the site on Tuesday.

Karolin Rockvoy, a McKenzie County emergency manager, said it was apparent from looking at vegetation that the spill went undetected for some time.

Fort Berthold Indian Reservation plays a key role in the state’s oil production, the second-highest in the nation. The reservation currently represents more than 300,000 of North Dakota’s 1 million barrels of oil produced daily, according to the state’s Department of Mineral Resources.

In 2006, a broken oil pipeline belched more than a million gallons of saltwater into a northwestern North Dakota creek, aquifer and pond. The cleanup efforts are ongoing at that site, which has been called the worst environmental disaster in state history.

The ruptured pipeline allowed saltwater to spew unnoticed for weeks into a tributary of theYellowstone River near Alexander and caused a massive die-off of fish, turtles and plants.

That spill came during the infancy of North Dakota’s oil boom. Now, a network of saltwater pipelines extends to hundreds of disposal wells in western North Dakota, where the brine is pumped underground for permanent storage.

Proposed legislation to mandate flow meters and cutoff switches on such lines was overwhelmingly rejected last year in the Legislature.