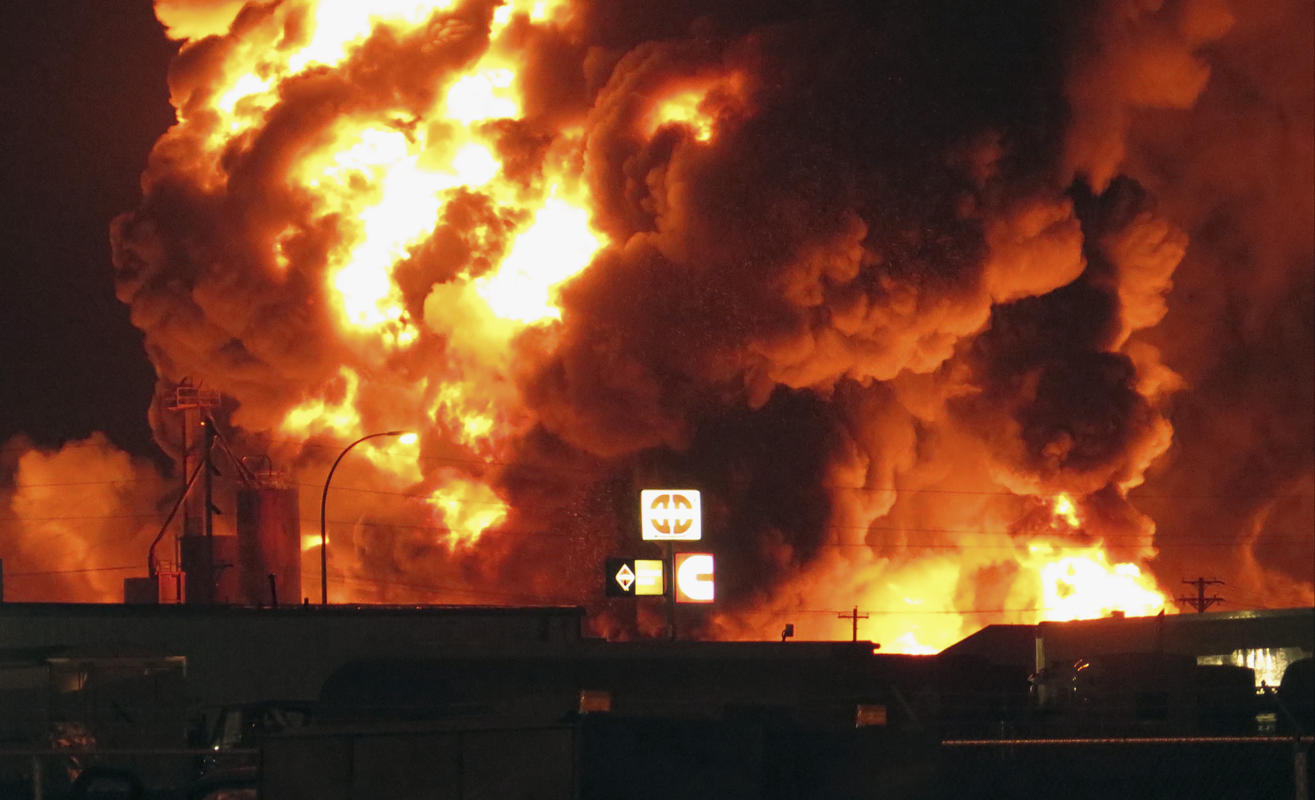 A fire burns at Red River Supply in an industrial part of Williston, N.D., in the early hours of Tuesday, July 22, 2014. (AP Photo/Josh Wood)

By JOSH WOOD18 hours ago

WILLISTON, N.D. (AP) — A massive fire was still burning Tuesday afternoon 12 hours after it began at an oil supply company in an industrial part of the western North Dakota oil patch town of Williston.

Department of Health Air Quality Division director Terry O’Clair said local fire departments are letting the blaze at Red River Supply burn itself out and a National Guard hazmat unit is heading to the scene.

It wasn’t immediately clear what caused the fire, which started about midnight Monday, and state officials said Tuesday there were no injuries. Red River Supply officials did not immediately respond to requests for comment, and law enforcement will not let anyone past the half-mile evacuation border.

The FAA issued a temporary flight restriction at 8:30 a.m. Tuesday for Sloulin Field International Airport until officials determine how hazardous a large cloud of gray smoke is, according to assistant airport manager Anthony Dudas.

O’Clair says the good news is that the plume of smoke is not blowing in the direction of the city.

“If it starts drifting toward the city that would be a concern,” he said. O’Clair also said that fire crews were limiting the use of water in order to reduce contamination.

The North Dakota Department of Health and other agencies are monitoring air quality near the site for any potential threat, according to agency spokesman Tim Wiedrich.

The site of the fire is just east of downtown and filled with warehouses and businesses that service the oil industry.

Occasional fireballs were accompanied by the pop of explosions around 1 a.m. Tuesday, and thick black smoke billowed above the towering flames.

Red River Supply provides services to oil companies working in North Dakota’s oil patch. It has rail spurs for loading and unloading liquids such as crude oil, and dry goods like drill pipes and casing, according to its website. The company’s website also says it provides storage, blending and delivery of drilling fluids, such as calcium chloride, calcium bromide, calcium nitrate and pot ash.

Emergency responders are expected to remain on scene for the next day or two, Hallesy said.

Roads are closed near the site, including a stretch of State Highway 1804.