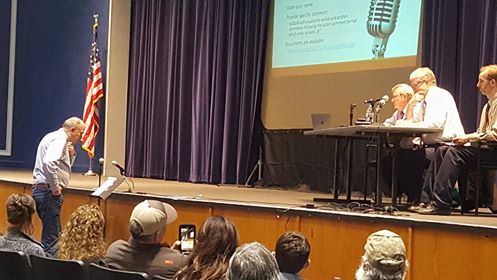 DICKINSON, N.D.—The North Dakota Department of Health received mixed comments at a public hearing Wednesday night about a proposed oil refinery that would be built on the fringes of Theodore Roosevelt National Park.

The majority of public comments veered negative, with a number of residents of the Belfield area and citizens from as far away as Bismarck and Grand Forks voicing concerns about the long-term air quality impacts that the proposed refinery would have as well as the damage it could cause to the views, wildlife and overall health of the park.

“The only piece of land in North Dakota that is owned by all Americans is Theodore Roosevelt National Park,” Marie Hoff said. “All Americans have a stake in this issue … the developers claim it will be a clean oil refinery … and the issue is more than viewshed, the refinery will affect air quality.”

Hoff said that the piecemeal approach to regulation by scrutinizing air quality, waste and water impacts separately by different departments flies in the face of how nature works. She further accused Meridian of pulling a scam on North Dakotans.

There were some supporters, including local ranchers and the auditor of the town of Belfield, Natalie Muruato, who voiced her faith in North Dakota regulators and noted the economic benefits the proposed refinery will bring, including more sustainable jobs and tax revenue.

“It means increased students that help with mill levy money. It means additions. It means bodies to serve on boards, to volunteer as firefighters and serve as medics. Technology … can coexist with natural resources,” Muruato said. “I know Meridian is working tirelessly to build a green refinery. Oil is a natural resource, a resource that North Dakota has been provided to run our vehicles, run our farm equipment and our construction equipment.”

Public comment went on for roughly two hours. Some specific concerns were whether the air quality division of the health department had anticipated the impact of regular truck traffic going in and out of the facility. Another point of contention were concerns that Meridian’s attempts to avoid being subject to the Public Service Commission’s regulatory scrutiny were deceptive or dishonest.

Linda Weiss, a Belfield resident, asked “what game are they playing?” referencing reports from Meridian citing the refinery’s output at 49,500 barrels per day. The air quality permit is for a facility that would produce 55,000 barrels per day — this discrepancy was seen as a means of escaping scrutiny from the PSC, which is not empowered to hold to standard facilities that produce less than 50,000 barrels per day.

“If you’re gonna propose something, then be very on board and absolute with that. Don’t play with the decision makers,” Theodora Bird Bear, a resident from Fort Berthold, said. She directly criticized the health department, saying that the state has still refused to clean up a spill that affects water near her.

The public hearing was simply that, hearing public input. The health department did not answer questions posed or provide comment on their own, prior to an opening description of the permitting process. This process has focused strictly on air quality impacts, according to a presentation by Rheanna Kautzman of the air quality department.

“What we do is we have federal mandates to keep air pollution at a certain level. These are set to protect the health of sensitive people,” Kautzman said. “We do that through our permitting program. We have permits to construct, we have permits to operate; we also have compliance work.”

Many of those who supported the project pointed out that North Dakota air quality remains to their liking, even with the uptick of energy work. Allan Richard, a landowner in Stark and Billings counties who also runs a cleaning company that cleans up oil spills, voiced his support:

“The state is doing a really good job at cleanups,” Richard said. “They’re getting the land back better than it originally has been. The park is just one entity of Billings County. The rest of the county still has to require getting a tax base off what they can … the oil industry has been around that part since the 60s. It has not affected any of the wildlife in the area, it hasn’t affected the pollution in the creeks … I’ve seen oil spills, I’ve seen saltwater spills, even on my own land. The forest service and the state has always done a good job. If they hadn’t, I’d be sitting on the other side of the fence.”

Other supporters noted that much of the concern has come from places as far away as Fargo or Bismarck and doesn’t reflect the local perspective, although several of the critical voices identified themselves as locals. It was also noted that there are other refineries that are already in operation that by the health department’s own statistics produce more emissions than Davis is even capable of, such as the refinery near Mandan.

Public comment will be considered by the health department prior to any decision regarding the permit. Written comments are being accepted until Jan. 26, 2018. To submit a comment in writing, send it to North Dakota Department of Health Division of Air Quality, 918 E. Divide Ave, 2nd Floor, Bismarck, ND 58501-1947. Email comments to AirQuality@nd.gov

Documents pertaining to the draft air permit to construct are available at www.deq.nd.gov/AQ/PublicCom.aspx#Meridian.