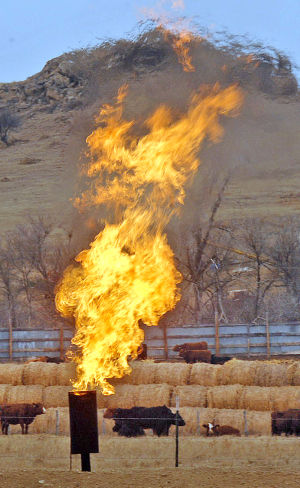 Oil and cattle are definitely part of the scenery in western North Dakota. This photo was taken north of Killdeer. (Tribune files)

A new state policy to rein in flaring of natural gas is still raising questions — about how it will be enacted and about its effect.

Industry officials say they’re gathering questions from companies to determine what needs clarification. Conservationists say they’re still reviewing the policy to determine how effective it will be at curbing flaring.

It requires the majority of new and existing wells drilled in the Bakken and Three Forks formations to meet requirements in how much gas can be flared. It also sets out targets for reductions in flaring to reduce the percentage down to 10 percent and as low as 5 percent by 2020.

Regulators say the industry is still figuring out what the new policy means for them.

“It’s probably a little too early for that. They (industry) probably need to digest it,” Department of Mineral Resources spokeswoman Alison Ritter said.

Ritter said following its passage the largest share of requests for information on what was passed came from investment companies, not industry.

“They want to understand what it means for their bottom line,” Ritter said.

The order stated that all current orders relating to Bakken and Three Forks wells producing at the maximum efficient rate would be allowed through Sept. 30. After Oct. 1 the Department of Mineral Resources would audit the production from wells and production restrictions could be implemented.

The October numbers will be available in January, shortly after the start of the 2015 legislative session.

Ness said the Petroleum Council is gathering comments from companies and should have a series of questions within a couple of weeks that the industry would like to get answered.

One murky area is when producers would be subject to production restrictions if found in violation of flaring targets. Ness questioned whether companies would be penalized on a monthly basis and, if so, how quickly it would affect them.

Ness also questioned the flexibility of the flaring target timeline. He said the recent Hess gas plant expansion ended up being a couple of months late in coming online and reaching full capacity.

“They probably went a little too far, but hopefully everything will track in the right direction,” Ness said.

Sierra Club of North Dakota spokesman Wayde Schafer had the opposite take on how stringent the policy was.

“The devil’s in the details. The capture plans are really going to be key,” Schafer said.

Schafer said his group, like industry, is reviewing the policy to determine the impacts. He said strict enforcement by regulators will be critical in ensuring the policy works.

He worries that it is too slow in meeting targets and that lowering the percentage doesn’t impact flaring if production increases.

Schafer said the group must continue to keep a sharp eye on the policy.

“We plan to stay engaged and continue watching the discussion,” Schafer said.