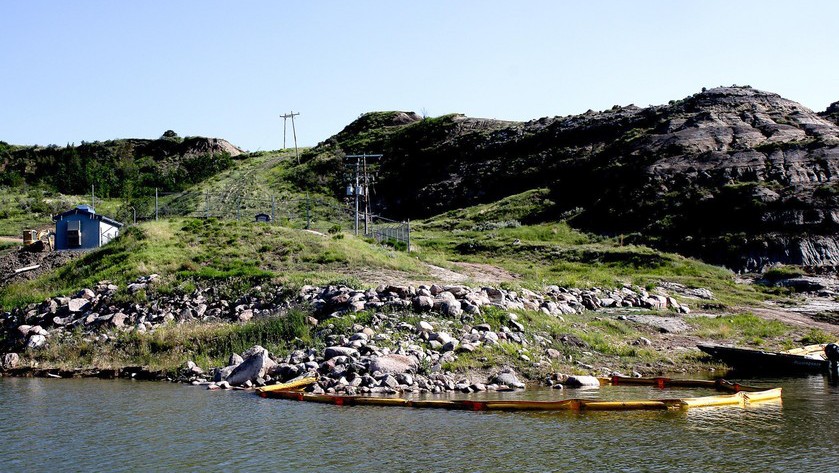 InsideClimateNews.org — In early July, a million gallons of salty drilling waste spilled from a pipeline onto a steep hillside in western North Dakota’s Fort Berthold Reservation. The waste—a byproduct of oil and gas production—has now reached a tributary of Lake Sakakawea, which provides drinking water to the reservation.

The oil industry called the accident a “saltwater” spill. But the liquid that entered the lake bears little resemblance to what’s found in the ocean.

The industry’s wastewater is five to eight times saltier than seawater, said Bill Kappel, a hydrogeologist emeritus at the U.S. Geological Survey. It’s salty enough to sting the human tongue, and contains heavy metals in concentrations that might not meet drinking water standards. The briny mix can also include radioactive material. Heavy metals and radioactive materials are toxic at certain concentrations.

“You don’t want to be drinking this stuff,” Kappel said.

The North Dakota spill has killed vegetation and contaminated the soil, and cleanup crews are working on remediation and monitoring. In an email, spokeswoman Debbie Hagen of Crestwood Midstream Partners—the parent company of Arrow Pipelines, the company responsible for the spill—said there is “no evidence of an impact to the local water supply.”

Confusion persists over the wastewater’s environmental and health effects because little is known about the composition of the spilled waste. The compounds it contains vary widely depending on local geology and drilling practices. And there are inconsistencies even within the industry over the definition of “saltwater,” which may or may not contain hydraulic fracturing (fracking) fluids.

Jim Ladlee, associate director of the Penn State Marcellus Center for Outreach and Research, said oilfield definitions vary by company, and the same operator may use different words for the same waste product in different parts of the country.

Both Ladlee and Kappel said it’s impossible to understand the potential impact in North Dakota without additional information about what, exactly, was in the pipeline.

Hagen, the Crestwood spokeswoman, did not answer questions about the saltwater composition. Because the spill occurred on tribal land, Alison Ritter, a spokeswoman at the North Dakota Department of Mineral Resources, directed all questions to the Mandan, Hidatsa and Arikara Nation, which did not respond by deadline.

Here’s what we do know:

1. The naturally occurring brines located in oil and gas formations hundreds or thousands of feet underground, known as produced water. The brines consist of water and dissolved chemicals leached from the surrounding rock. These include:

Sodium and chloride (the compounds that make up table salt).

Other dissolved compounds such as barium, calcium and bromide.

Once a well begins operating, produced water flows out of the wellbore along with the oil and/or gas. The mixture is separated at the surface, and the produced water is trucked or piped away for disposal through “saltwater pipelines.”

Flowback comes out of the well during the first two to three weeks after it’s fracked. Like produced water, the flowback is shipped via pipeline for disposal in injection wells or waste pits.

3. Produced water, which has been treated to remove almost everything but salt and is reused in the fracking process. Ladlee, the Marcellus Outreach representative, said produced water is sent to treatment plants, which remove most of the dissolved material except for the salt. The treated salty mixture is diluted with fresh water, and fracking chemicals are added to create a new batch of fracking fluid, which is used to frack another well. If the North Dakota pipeline was carrying fluid from a treatment facility to a well site for recycling, Ladlee said, then the saltwater would contain very salty water, but with few heavy metals and radioactive material.

The North Dakota spill caught media attention because it was unusually large. But smaller “saltwater” spills occur more frequently. According to the Associated Press, there were 74 such spills in North Dakota last year, spilling a total of 924,000 gallons.

Republished with the permission of InsideClimate News, a non-profit news organization that covers energy and climate change issues in law, policy and public opinion.