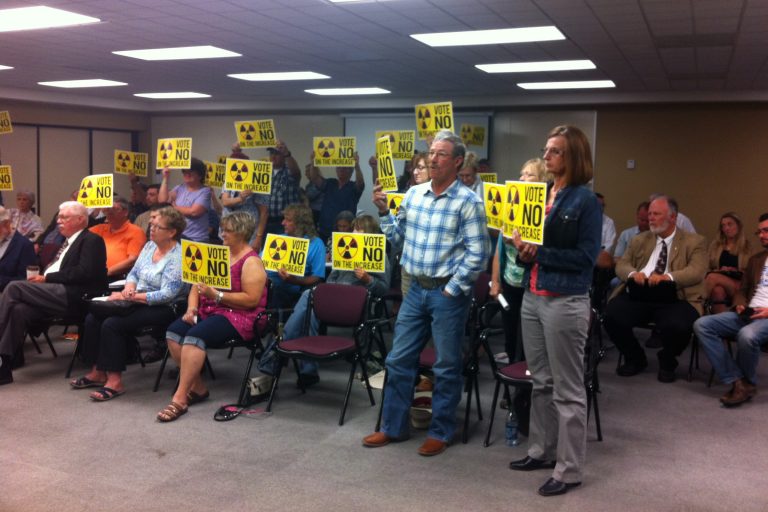 BISMARCK – The North Dakota Energy Industry Waste Coalition (NDEIWC) and Dakota Resource Council (DRC) are calling for a formal inquiry into the Health Department’s knowledge and omission of known radioactive waste violations at a Health Council meeting in August where they advocated increasing the allowable radioactive waste levels. The groups sent Governor Jack Dalrymple the request for investigation via letter on Sept. 9, 2016.

“We are asking for the radioactive waste rules to be suspended during this investigation,” said Don Morrison, executive director of DRC. “Had the Health Council known about these recent violations by permit applicants, would they still have voted for the rule change asked for by the industry and lobbied for by the Health Department?”

On Aug. 9, the North Dakota State Health Council voted to ratify the increased level for radioactive waste that was originally pushed through with an improperly noticed public meeting in 2015. The Health Council called the “redo” meeting one day after a judge heard the state’s request to dismiss a lawsuit regarding the Health Council’s violation of open meetings law, a clear attempt to avoid deeper examination of the matter.

The NDEIWC and DRC believe the Health Department willingly misled the Health Council and the public by not providing information about multiple radioactive level violations discovered months earlier.

At the Aug. 9 meeting, the Health Department withheld the results of its own “sting operation” conducted in May and June. Indian Hills Disposal, which had applied for a permit under the increased level, was caught with a whopping 950 tons of illegal radioactive waste, measuring up to 80 picocuries/gram. The company had already withdrawn its application, saying it needed more “community education.”

Two other landfills, Secure Energy Services and Gibson Energy WISCO, were in the process of applying for expanded permits under the recently ratified new rules. But the Health Department also discovered illegal material on site at both locations during the same inspection and both applications are under review.

“Why wasn’t the public told of these violations when they were discovered months ago?” Morrison asked. “It is a slap in the face to know now that Health Department staff were aware of these violations at the same time they were advocating for increased radioactivity for an industry that already doesn’t follow the rules.”

In what seemed like too little effort too late, a motion to study the long-term effects of radioactive waste was adopted after the Council voted to ratify the increased radioactivity levels. There was no funding, scope, or timeline identified for the study, and any funding will need to come through Legislative action.

At the Health Council meeting, respected scientists questioned the quality and methodology of the Department’s study data used to justify increased levels. In addition, more than 60 people came Aug. 9 to urge the State Health Council to vote “no” on the increased limits, voicing concerns about the impact to public health as well as property values. However, Health Department staff testified in favor of the increased radioactivity levels, saying more radioactivity was safe. Director Scott Radig attempted to dismiss concerns by stating that inspections are a “high priority.”

“If inspections are such a high priority, why haven’t our current state officials had the proper equipment, staffing, and studies in place before accepting higher levels of radioactive waste?” said Morrison. “Why are operators like IHD – with multiple offenses in consecutive months – still allowed to do business?”

Chief of Environmental Health, Dave Glatt said at the Aug. 9 meeting, “If you show the industry their problems, they’ll go after them.” But, with IHD incurring multiple violations, this isn’t true. To boot, the Health Department declined to fine IHD, according to Glatt, based on direction from the “higher-ups and it was decided not to if [IHD] takes care of the problem and it doesn’t occur again.”

The lack of intentional monitoring for every load, the Health Department’s enthusiastic defense of offenders, and the lack of care and respect industry has demonstrated for current rules and regulations shows us what the future holds if current lax attitudes of state officials continues. What we need is to ensure private companies who want to do business in North Dakota prove their trustworthiness, not be granted the freedom to poison our land and people.

The people of North Dakota deserve better from their state government.